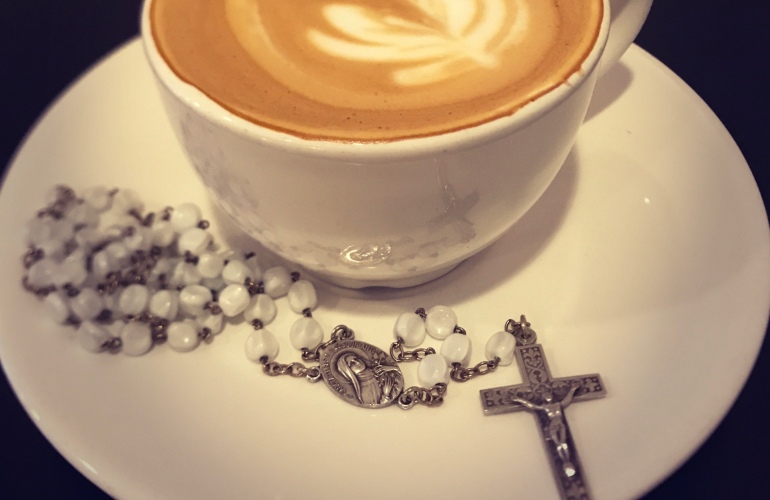 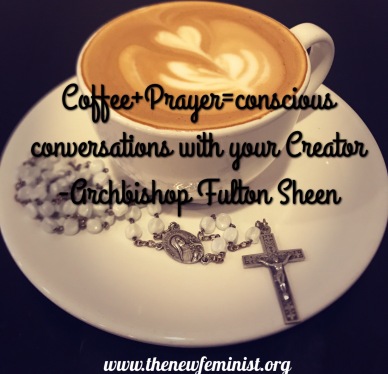 I got hooked on coffee long before I got hooked on prayer. Prayer has always been a part of my life, since I have always been serious about my faith, but for a long time prayer was relegated to Sunday Mass, blessings before meals, and the occasional prayer of petition. Even after I began to realize how much was lacking in my prayer life, I was tempted to think that I just wasn’t cut out for deep conversations with the Lord. Sure, I went to Mass every day and attended Adoration on a semi-regular basis, but it felt like going through the motions. I was envious of friends who were capable of deep contemplation, but I was convinced that this just wasn’t for me.

All that changed last January, when I encountered the Sisters of Life for the first time. (If you have never had contact with the sisters, go to http://www.sistersoflife.org asap and sign up for a retreat! It will change your life.) As they led me through a two-day retreat filled with prayer, I felt that when I prayed I was actually talking to God, and He was answering me! I thought, “This is what people mean when they talk about prayer!” After the retreat, it was difficult to keep that feeling of intense closeness to God, but I was now convinced that it was attainable. In the months since then, God, in His mercy, has drawn me closer and closer to Him through prayer. And while it still sometimes feels like I am just going through the motions, I now realize that prayer is for everyone, not just the select few, and that if we put the effort in, God will teach us to pray.

I have also discovered the way in which prayer is particularly important to living out my vocation as a woman. All human beings, both men and women, are called to intimate conversation with the Lord, but I think prayer plays a particularly important role in the lives of women. Through their receptivity, women have a sort of direct line to God. If men have God’s home number, women have His cell. In the hustle and bustle of daily life, women have a unique ability to listen to God’s voice and give a resounding “yes” to His call, as Mary did with her “fiat.” As I have progressed in prayer, I have felt my feminine genius flourish and have discovered the joy that comes with the exercise of spiritual motherhood through prayer.

All this leads me back to Fulton Sheen’s words: “Coffee+Prayer=conscious conversation with your Creator.” On the face of it, these words might seem to be just a witty remark (and perhaps that was Sheen’s main intent). However, I think they can point us toward a deeper understanding of prayer. Time and again in the Gospels, Christ exhorts us to “stay awake.” When the apostles fall asleep during Christ’s Agony in the Garden, He remarks that “the spirit is willing but the flesh is weak.” How true that is! How many times have we dozed off in Mass, not out of lack of desire to be with the Lord but sheerly out of the weakness of our human bodies? How many times have we become distracted by unimportant thoughts or tasks when we should have been praying, spiritually “falling asleep?” The main remedy for this is grace, but God doesn’t forbid us from helping ourselves, whether this comes in the form of drinking coffee or choosing to go to a slightly later Mass so we can be more alert. (After nearly falling over in the pew three times in one Mass, I gave up on the 7:15 Mass in favor of a more civilized 9:00.) Prayer is not justan option. It is not just for  great saints and mystics. And God meets us where we are, helping us to develop habits that will bring us closer to Him. Let us strive to stay awake, both physically and spiritually, so as to deepen our prayer lives. And for some of us, that will involve coffee.